How to Slice a Brisket 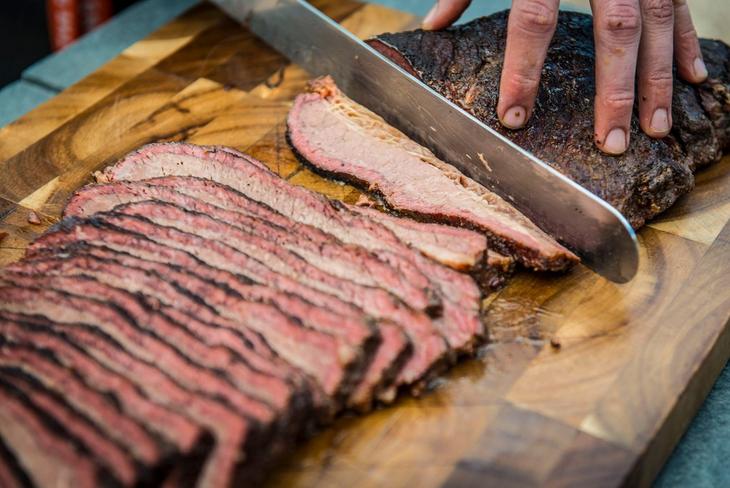 When cooked right, a brisket is hard to beat. But one wrong cut and all the masterful work on the grill is ruined. Knowing how to slice brisket correctly is essential.  The key task we want to go over is slicing the meat after your brisket is cooked. Thankfully it’s not rocket science. With these tips in mind, you’ll learn how to cut a brisket like the best of ‘em.

When you pull your brisket off the grill (fully cooked at about 195-205 degrees Fahrenheit internal temperature), the first step is to let it rest for at least 1 hour – you can let it rest up to 3 hours. According to Traeger’s BBQ expert Chad Ward, “Allowing brisket to rest lets juice redistribute throughout the meat. If sliced right off the grill, the meat would lose moisture.”

You want a blade that’s long, sharp, and serrated so that you can cut most or all of the meat at once. The serrated edge also helps saw through the tough parts of the meat. Doug Scheiding’s recommended knife to trim is a 14-inch slicer. Find a good, sharp knife with a weight that feels good in your hand.

Above all else, the important thing is the direction of your cut. You want to slice against the grain.

Before cooking, we recommend slicing a corner of the flat as it is easier to see the grain when the meat is uncooked. Use that corner to help you find the direction when the brisket is done and ready to be sliced.

First, trim any excess fat from the side if you haven’t already trimmed them while prepping your brisket.

You want to slice against the grain (or across) at a 90-degree angle starting with the flat.

Once you start to get to the middle of the meat, you’ll start to see two layers of muscle – this is the point cut of the meat. Stop cutting. The direction of the grain has changed. Rotate your meat about 90 degrees so you can cut against the grain of the point cut.

If you’re not sure how to cut a brisket against the grain, start with the flat end of the brisket, cutting slices just shy of one-half inch.

You don’t want to cut down directly like you would a piece of cheese, but you’re not quite sawing through a two-by-four either. The meat should be tender enough that you can gently saw through it while slicing down – as you would through a soft loaf of fresh-baked bread. You want the slices to be the width of a #2 pencil as Aaron Franklin recommends.

It’s your BBQ and your rules, so going against the grain doesn’t just apply to how you cut it, but also how you flavor it. Feel free to browse all of our brisket recipes and let us know what sort of flavor combinations work best for you!