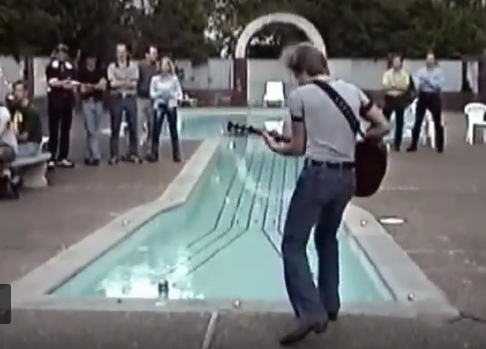 You just have to see Keith Urban’s 1999 audition in Nashville by a guitar shaped swimming pool!

The legendary swimming pool sits next to the Spence Manor Hotel just off Music Row. Many celebrities hosted parties around this famous pool built by Nashville legend Webb Pierce in 1978. A young singer and guitar player was hired to perform at a party in 1999 attended by music executives. It was one of Keith Urban’s first USA appearances and he just blew the party goers away.

Urban released his first album not long after that performance and the rest is history. Keith Urban has since sold millions of CD’s, won numerous Country Music Awards. He appears regularly at the Houston Livestock Show and Rodeo.

Urban married Nicole Kidman in 2006 and has settled in Nashville in a 10,000 square foot mansion with a 2 acre Backyard Bay with multiple sitting areas, a large patio, tennis court, spa and rectangular swimming pool. The couple has assembled a multi-million dollar portfolio of homes in Nashville, Beverly Hills, New York City and several homes in Australia. All featuring a spectacular Backyard Bay.

And, it all started at an outdoor audition by a guitar shaped swimming pool!