This Pool Can Carry A Tune 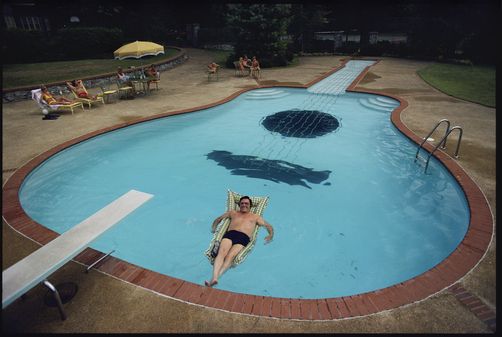 Would you buy a Mason jar filled with swimming pool water? Many people in Nashville, Tennessee coughed up $1.00 for the water from Webb Pierce’s guitar-shaped swimming pool.

Country music Hall of Fame inductee Webb Pierce was one of the biggest country music stars of the 1950’s. He joined the Grand Old Opry in 1952 and had three number one hits in 1955, including “In the Jailhouse Now,” “Love, Love, Love,” and “I Don’t Care.”

Pierce fell on hard times in the early 70’s resorting to tours of his Nashville home and selling souvenirs including Mason jars filled with water from his swimming pool. About 3,000 people were taking the tour each week until neighbor Ray Stevens filed a complaint and stopped the tours. Pierce built yet another guitar-shaped pool not far from Music Row.

You can see the Webb Pierce story in Episode 5 of “Country Music” by Ken Burns. It’s playing now on Public Television. Channel 8 here in Houston.