The Pool That Music Built 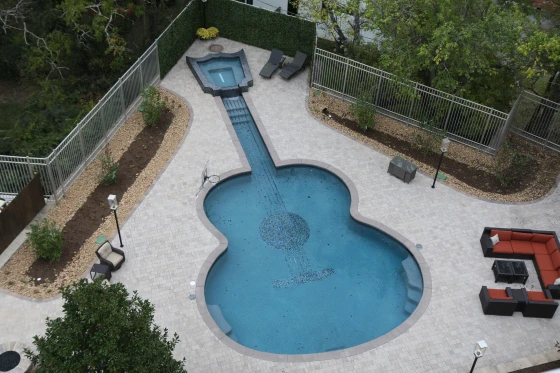 Here is another guitar-shaped swimming pool just outside of Nashville.  It sits in the backyard of country music singer John Rich’s home.

It was built in 2017 and overlooks the city lights of Nashville.  John Rich calls it, “The House That Music Built.”

The spa sits where the string tuning would take place and spills into the “neck” of the pool.  No need to “fret.”  There aren’t any.  The pool’s “strings” are made up of inlaid tile.

Save a horse, jump in the deep end!

John Rich was a contestant on Celebrity Apprentice in 2011 and raised over $2 million for St Jude Children’s Hospital.

John Rich was born in Amarillo.  He started out playing bass guitar for a band called “Lonestar.”  He joined Big Kenny to form “Big and Rich” in 2002.